Alright. More than a little behind on my recaps due to a project at work. I'm excited to be doing well (provisionally, don't want to jinx ourselves) and making a little more, but it comes with the side effect of sometimes carrying projects over into the evening. I've been working on an SQL procedure to help track stock and cut down on parts theft but at some point I apparently offended someone, because now an entire department isn't talking to me. (When I fail at human interaction, I fail LIKE A BOSS.)

So, that's the RL stress that has kept me relatively away from recapping, though I've been watching faithfully (and with many breathless screams). Let's talk about some other, far more interesting people who fail at human social interaction!

... actually, I don't need boys for much of anything myself, but they are occasionally pretty to look at (James McAvoy, Hugh Dancy) and nice to listen to (see previous, and Michael Fassbender and Mads Mikkelsen). And Sasha Roiz (Renard, Grimm) is very tall... okay, they have their uses. ^_~ But, as Margot Verger says, they are totally optional accessories in many areas of life. *snerk*

At any rate! I am obviously here to inflict my art on you again (you poor dears). Submitted for your approval: Abigail Hobbs and Jeanne Weaver are ready to kick ass and take names-- and that includes the writers who offed them to advance the lead male's character development. ^_~ Crossover with Falling Skies.

We Don't Need Boys To Save the World
Click to Enlarge!

I originally started this in honor of Amber's birthday, but I didn't finish it in time. ^^; Never the less, it was definitely inspired by our mutual frustration at the loss of two such amazing female characters. Yes, I understand Abigail dying... the show is called 'Hannibal', after all. But the loss of Jeanne was just lame.

Just a quick post to celebrate the birthday of the ever-lovely and witty minttown1! I hope you have a wonderful day, filled with things you love-- you deserve nothing less. And I will personally beat up anyone who says otherwise. ^_~

I honestly started your present early this year, but part of it is on order and the other (woefully inadequate) painting isn't done yet. Hopefully I'll be able to finish it up this weekend, maybe even before then. (There's nothing like a good slew of Criminal Minds on the DVR to supplement a marathon painting session. Of course, then I want to doodle Will and Spencer having a slumber party and wearing fuzzy feetie pajamas. X_x''') In the interim, I have a small and hopefully amusing Abigail Hobbs sketch. Because I'm still not sure who I'm more pissed off about-- Abigail, or Beverly.

In the spirit of Halloween, Miss Hobbs is haunting someone who definitely deserves it, with all the anti-cannibal horrors you and I have discussed! ^_~

I had fun doing the fingerless gloves and her 'little-red-ridding hood cloak'. She probably got the stag's-skull corset from the same place Hannibal and Chilton buy their decor. ^_~ I added goobers-- there are few people I can think of less physically and emotionally capable of eating goobers than Hannibal Lecter. (Lex Luthor? Erik Lehnsherr? Spock?) Just regular ink pen on steno paper, but I hope it gives you a laugh.

Alright-- sitting down to do this on a Monday because, a) I suck and b) I had a terrible migraine Friday, which meant I had to make up my time on Saturday, and then squeeze all my weekend chores into Sunday. Hopefully I'm emotionally prepared for this now. Natch, Fuller, I know you pull this shit on purpose.


And now, as a tribute to my beloved Beverly, I have some fan art. I actually started this on Thursday, during a hideous six hour training class. (That's why I always bring a notebook-- not cause I'm gonna write things down, but because it's great for hiding sketches in. ^_~) I'm not thrilled with the color scheme, but I had to work with what was on-hand, and then finish up at home. I'm trying to make the thumb-nail small enough so it won't be spoiler if you don't look too closely.

Abigail's hair turned out too red, and my stupid scanner one more failed to pick up the background shading. Otherwise, for a quick comic, I'm pretty happy with it. Though apparently my subconscious thinks that the dress-code in heaven is pretty lax, as long as you wear white and blue. X_x;; When Bev and Abigail are done, Amber and I are gonna slip in a wipe our greasy McDonald's super-size fries all over Lecter's furniture, too. ;-)

Seriously, this show. *cowboy drawl* I wish I could quit you. XD

*The alternative title, for all you MST3K fans, is Angel's Revenge. Yes, I'm done now.

Whew! Would you believe that today is the first day in two weeks that I've worked a typical-length shift during my regularly scheduled hours? I've had odd days off, thankfully, but we also had LC (little cousin) fly in to visit on the 22nd. We put him on the plane back to Florida yesterday afternoon: two mojitos, one bottle of absinthe*, three boxes of sugar cubes, one cross-bow hole in the basement wall, seven boxes of pizza and one flaming kitchen sink later. I love that kid dearly-- we've patched up a lot of the complicated/hard feelings that we (meaning LC, Sam, the girls and I) were dealing with back in 2010-- but he's as zany as ever. I wouldn't change him, but he does take some looking after.

*NECESSARY DISCLAIMER: Not "real" Absinthe-- it's that Lucid stuff that sells legally in the States.

Overall, this Christmas was one of the best I'd had in years. ( Collapse )

Sam, LC and I brought the girls home and popped in Pacific Rim. Then when the sun had set and the stars were brilliantly visible in the night sky, they took me outside and showed me the backyard telescope they'd gone in on as my present. I was completely floored-- still am! It was such a sweet and amazing gesture, especially since it's something I've always wanted, but never would have bought by myself. It took two nights of practicing, reading and playing with it but by Friday night, I was able to point it at Jupiter and see not only the faint pink/orange orb itself, but also the four Galilean moons. They hung there in the black, silent and serene cogs an almost-perfect mechanism of creation. Of course, I cried. X_x;;; It was very beautiful, though-- and I am very, very excited about learning to find other objects!

I hope everyone else had an amazing Christmas/holiday-- all of my friends deserved that, and so much more. In the next couple of days, I hope to post some distressingly late Christmas presents for friends/fandom. We'll start with Amber (aka minttown1):

Basically inspired by all the times I've wished Abigail's story could have ended differently. I realize the show is called Hannibal, but it's just not fair to have such a strong, subversive female character end like that. Part of me still irrationally hopes her story isn't over. ^^;;;

Leigh-darling, I promise I'm working on your 'Roti' fic! Unfortunately, every time I even think about the new Season 2 promo poster, I have a reaction of such profound and irrational despair that I cannot even articulate it in words. It looks something like this:

I work a short day tomorrow, and then I'm off New Year's day. Everyone stay safe, happy, and enjoy the 'tail end' of the Year of the Snake. *rimshot* ^_~

I fully intend to post the rest of my Hannibal 1x06 recap this evening. But, just in case my not-entirely-justified exhaustion (I got a full night's sleep! Why am I more tired than ever!?) gets the better of me, I thought I'd go ahead and post this.

Actually started working on this around Episode 3 or 4, which was well before Amber's birthday. In a way, it's kind of a belated birthday gift, as we both over-identify with champion for Miss Hobbs. This was something I couldn't just do as a comic-- I had to break out the big guns. Watercolor pencils, chalk ink, india ink, and Smooch glitter on bristol board; the original is about 8x10. You can find a non-text version at the bottom.

Actually, a zombie invasion might brighten Abigail's day. Hannibal, on the other hand, would starve. Hahahaha.

Most of this post is based on notes I scribbled down while watching this episode on Saturday. The scheduled delay (is there such a thing? ^_~) turned out to be for the best for all of us, as well as being respectful-- so I pretty much just typed up my scribbles this evening and was all set to hit 'post'.

And now, without further RL emotionalism, we'll dig right into the fictional carnage and manipulation-as-blood-sport! (Hey, I have outlets-- I never said they were _cheerful_ outlets. ^_~)

First off, I am feeling _much_ better today-- believe me. ^_^ I'm sorry my entry last night was kind of hectic and emotionally overwrought. I promise I've calmed down now. Or, you know, whatever passes as 'calm' for me. (There are some people who'd argue with you on that one. ;D)

So, let's try this again!

So… what did we learn today? Check it out: 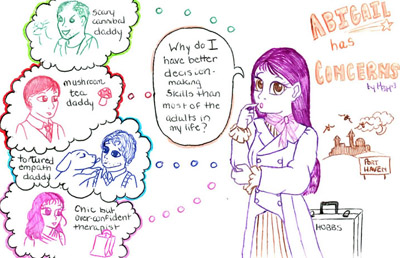 Dedicated, as always, to Leigh and Amber. You ladies are AWESOME. <3
-Meredith

Ohhhhkay. Feeling a melancholy tonight, so I want to apologize in advance if this recap gets a little dark(er) or morose. I don't have any particular reason for feeling down-- just a cluster of migraine headaches this weekend, and a pervasive feeling of restlessness has pretty much colored the whole week. *shrugs* You know those evenings when the edge of dusk is just too blue, and the clock can be heard ticking even past the most cheerful of your music, and whatever inarticulate emotion you're experiencing just echoes in your chest like either it or your own body just doesn't quite fit? *shrugs* It's like that.

So here we sit, flood-grade flashlights in hand, for whatever this episode has to offer. I have to admit, I have not seen this one at all before. It's all shiny and full of teeth new to me.

So, lots and lots of love, and tomorrow night we'll all pile on the carpet like Will's dogs and have a sleep over and braid each other's hair. ^_^
<3
-Meredith
Collapse